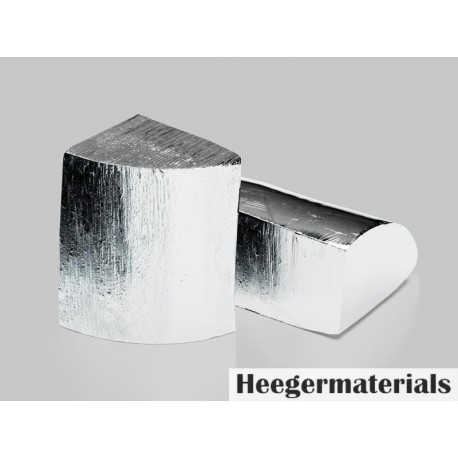 High-purity and ultra-high purity Zinc (Zn) materials are crucial components for the research, development, and production of advanced technologies which require optimum properties, performance, and quality.

Zinc, whose name "zinc" derives from Latin Zincum, meaning "white thin layer" or "white sediment". The chemical symbol is Zn, that its atomic number is 30 and has an atomic quantity of 65.38. Zinc is a silvery-white slightly pale blue metal with a density of 7.14g/cm3 and a melting point of 419.5℃. At room temperature; soft at 100~150℃ and dry after over 200℃. The chemical nature of zinc is lively, producing a thin and dense alkali zinc carbonate film, which prevents further oxidation. When the temperature reaches 225℃, the zinc is oxidized violently.
Zinc is difficult to burn in the air and emits a strong white light in oxygen. The zinc surface has a layer of zinc oxide and white smoke burns. The main component of white smoke is zinc oxide, which not only blocks zinc from burning but also reflects the flame color to form a miserable white light. Zinc is easily soluble in acid, and it is also easy to replace gold, silver, and copper from the solution. The oxide film of zinc is high, but the metal zinc melting point is very low, so heat the zinc film on the alcohol lamp, the zinc film melts soft, but does not fall, precisely because of the action of the oxide film. Zinc is mainly used in steel, metallurgy, mechanical, electrical, chemical, light, military, and medicine.

Zinc is crucial a component for the research, development, and production of advanced technologies.

Galvanizing has excellent atmospheric corrosion resistance, and easily generates a protective film on the surface at room temperature, so the biggest use of zinc is for the galvanizing industry. Mainly used for the surface plating of steel and steel structural parts (such as a galvanized plate), widely used in the automotive, construction, shipbuilding, light industry, and other industries.

Zinc alloys are used in the automotive manufacturing and machinery industries. Zinc has the applicable mechanical properties. The strength and hardness of zinc itself are not high, but after the addition of aluminum, copper, and other alloy elements, its strength and hardness are greatly improved. Utah is the emergence of zinc-copper-titanium alloy. Its comprehensive mechanical performance has approached or reached the level of aluminum alloy, brass, gray cast iron, and its anti-creep performance has also been greatly improved. Therefore, zinc copper titanium alloy has been widely used in hardware production.

Zinc can be used to make a battery. For example, zinc and manganese batteries and zinc-air batteries.

In addition, zinc has good anti-electromagnetic field properties. The conductivity of zinc is 29% of the standard electrical copper, the zinc plate is a very effective shielding material, and because zinc is non-magnetic, suitable for instrument parts materials and instrument housing and coins, at the same time, zinc itself and other metal collision will not occur sparks, suitable for underground explosion-proof equipment. It is widely used in rubber, coating, enamel, medicine, printing, fiber, and other industries.

Store in a cool and dry place, far away from the fire and heat source. Store with oxidants, amines, sulfur, phosphorus, acid, and alkali classes. Fire extinguishing: dry powder and dry sand, do not use water and foam.